This company thinks the eNom backpack girl looks similar to its CEO.

At what point does a cybersquatting complaint filed under UDRP become laugh-out-loud funny?

I think we have now have the answer, although the respondent in this case probably isn’t laughing.

So it reached out to David Greenblatt, who registered Patricks.com in 1997. The complainant started operating under the name Patricks much later (this decade).

Greenblatt responded with a price that didn’t please Patricks Universal Export Pty, which filed a UDRP as “Plan B” for getting the domain name.

I’m going to copy these allegations directly from the UDRP decision, because they are really, really funny:

“The Domain Name has been parked since 2014 and may now be secretly for sale. It is “secret” in that one can only see this when clicking on the “privacy policy” at the bottom of the Website.”

“The original registration was in bad faith as the historical captures of the Website shows that the Respondent registered the Domain Name and all the other domain names to sell for commercial use and he now secretly tries to sell them.”

“In March 2016, the Complainant tried to contact the Respondent on the telephone number found on the WhoIs of the Domain Name at least 10 times a day at different times for over a week and no one answered the telephone. This is evidence that the Respondent was hiding some or all of his bad faith acts in this manner.”

“The Respondent has engaged in a pattern of conduct to register hundreds of domain names for the purpose of preventing the owners of trade marks and trade names from reflecting their trade mark in a corresponding domain name. These trade marks include “9to5”, “agentbooking”, “findcheapair”, “easy123dining”, “mqzm” and “Vqdv”.”

Was the complainant being serious? It’s so sad I might just cry.

But here’s where it gets really funny:

The Respondent’s posting on the Website of a photograph of a smiling girl with blonde shoulder length hair with a side parting fringe (the “Photograph”) between 2012 and 2014 is evidence of bad faith as it bears a striking resemblance to the Complainant’s CEO Aimee Kidd and this was the time when PATRICKS was becoming a global name. The use of the Photograph on the Website which was offering the Domain Name for commercial sale was to draw the Complainant’s attention to the Domain Name for the purpose of extracting lots of money for its sale. Further the use of the Photograph probably infringes a third party’s copyright which also supports a finding of bad faith.

Want to see the image the complainant is talking about? 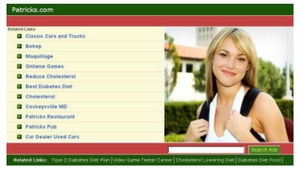 According to Patricks, the owner of the domain deliberately set up a page with an image similar to that of its CEO Aimee Kidd. The goal was ostensibly to attract Patricks’ attention and get it to buy the domain.

To be fair to the complainant, there is some resemblance here 🙂

This is one of the few cases in which a finding of abuse of the administrative proceeding is beyond obvious. While such a finding is always a matter of discretion, the Complainant’s empty rhetoric, mudslinging, and unsupported factual allegations require this Panel to impose the only sanction available to it.