[Editor’s note: In this post, Chris LaHatte reviews Gerald Levine’s book Domain Name Arbitration, A Practical Guide to Asserting And Defending Claims of Cybersquatting Under the Uniform Domain Name Dispute Resolution Policy. Although LaHatte is the ICANNOmbudsman, this post was written in a personal capacity.] 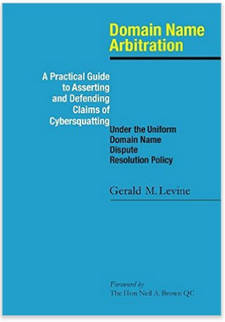 Dr. Gerald Levine is a New York attorney with a depth of experience in intellectual property matters. He has written widely on many difficult topics including the Dispute Resolution Journal of the American Arbitration Association, the New York Law Journal and Law School law journals. So with this depth of experience, a text from him on the somewhat specialised area of domain name arbitration would be a most useful adjunct to practice in this area.

When ICANN first took over oversight of the domain name system, it became apparent that there was a need for a process to deal with disputes between owners of trademarks and those who sought to register domain names which were the same as or very similar to an existing registered trademark. The immediate problem was that the registration of domain names, is truly cross-border in a fashion unique in the intellectual property world. A domain name can be owned by anyone anywhere in the world (with the exception of some countries such as North Korea) and a domain name registrar can similarly be located anywhere. This of course applies only to the generic top level domains and not to those run within a country as country code top level domains. Many countries have their own regimes for protection, and while the UDRP system has some impact on the decisions within those countries, this text is only concerned with the generic top level domains. It does have a brief appendix on some dispute resolution policies in English-speaking countries however which contains in bullet points, the principal differences.

Another unique aspect of the UDRP system is that it is not a creation of the jurisdiction of any particular country or of any particular NGO or international organisation. ICANN itself is a not for profit company registered in California, but with offices across the world. But it recognised at an early stage that there should be a system to deal with domain name disputes and worked with the World Intellectual Property Organisation (WIPO) to create an arbitration system described by Dr. Levine as “transformative in offering a form liberated from national jurisdictions”. This creates a jurisdiction which is not based on either the jurisdiction of a particular country or upon treaty legislation agreed between multiple parties. This aspect makes the body of jurisdiction the first truly global body of law that perhaps reflects the global nature of the Internet itself.

There has of course been some academic study of the UDRP system and the jurisdiction created since 1999. However, I believe that this text is the first to offer an analysis of the reported cases expressed as a practical guide, drawing out the principles by reference to those cases. This is another unique aspect of an arbitration system. An arbitration is a private adjudication between the parties, and it is most unusual for the result to be published. Some judges have lamented the loss of reported decisions to the world of arbitration and a diminishment of stare decisis as a result. But the UDRP system has published the results from the beginning. Dr. Levine helpfully discusses how the body of jurisprudence developed from the cases as they were first reported and how principles were developed in a fashion similar to that of a common-law jurisdiction. Of course those parties taking advantage of the system have also drawn upon the body of law from trademark and other sources. It is increasingly common to see UDRP decisions which contain citations from a precedent decisions, and so the factual analysis and legal analysis by Dr. Levine provides a resource to enable the parties to glean the relevant principles.

The text is intended to provide an authoritative guide to the principles and begins by outlining the historical development of the process, and discussing the legislation and architecture of the UDRP, together with a useful discussion of jurisprudence. He then deals with the contractual basis for the UDRP, followed by the scope of the UDRP. This is a particularly useful section, sadly not considered by a reasonable number of parties who seem to be surprised when the panel rejects claims such as business disputes or disputes between former partners.

He then deals in some detail with the complainant’s burden of proof, and sets out a comprehensive list of thresholds and tests. He has a valuable section on the issue of unregistered trademarks, which can be used particularly in civil jurisdictions to found a successful claim. The other side of the coin is the respondent’s lack of rights or legitimate and interests under the policy, and there is a careful analysis of issues such as priority, legitimate interests, proving a prima facie case, using domain names in bad faith and the issues in relation to these. He has an extensive section on evidence where a respondent has registered and used a domain name in bad faith, followed by a section on proving rights or legitimate interests in the disputed name.

The closing chapters deal with selected rules of the UDRP policy so that the reader is familiar with the procedural elements and important matters such as single or multiple complainants’s and multiple domain names and consolidating proceedings. He discusses the issue of timing to file submissions and the consequences of default. There is a brief discussion about the constitution of the arbitral panel. It would be a very minor criticism that he does not go into the issue of appointing a single or three-member panel. Experienced counsel in this area have expressed firm views on the advantages of a three-member panel, particularly in complex cases. Similarly, there is no substantial discussion on that the choice of the provider whether it is WIPO, Forum, and the Asian, Czech and Arab Centres for Domain Dispute Resolution. To some extent this is a preference based on language but the most substantial numbers of disputes file are certainly with WIPO.

Finally, he deals with the consequences and the issues before during and after UDRP proceedings in the courts of competent jurisdiction, and compares the remedies with proceedings such as relief under the ACPA legislation, with a brief discussion on the United Kingdom rules.

In summary, this is the practising lawyers guide, rather than an academic discussion. However the analysis of the legal principles does go into some depth, and it would not surprise me to see this text cited in panel decisions in the future. The summaries of the issues are succinct and clear. There is no index, which is a little surprising, although the table of contents is fully detailed. This may merge and further additions I expect. During the course of reading the text and preparation of this review, Dr. Levine thoughtfully provided an update, which he described as a work in progress. That clarifies and adds to some of the discussion throughout the text.

Because it is a practical guide the citations are virtually all of reported decisions although where appropriate there are references to the ICANN rules and comments on those rules. While the decisions are relatively easy to find on the provider websites, this text can be used as a one-stop shop for a domain name litigator, and I expect that it will be found on the desks of all lawyers who practice in this field. I certainly would recommend purchase for anyone practising in this area, including lawyers, domain investors and those involved in ICANN.

Domainers Will Love This UDRP Decision