A Canadian appeals court has confirmed that crafts store chain Michaels (NASDAQ:MIK) should be awarded the domain name Michaels.ca.

The loser: a guy whose last name is Michaels.

It seems that the retailer was miffed at what it saw as the defendant trying to capitalize on confused internet users. Here’s what Michaels.ca looked like on May 2014, one month after the crafts retailer filed the suit: 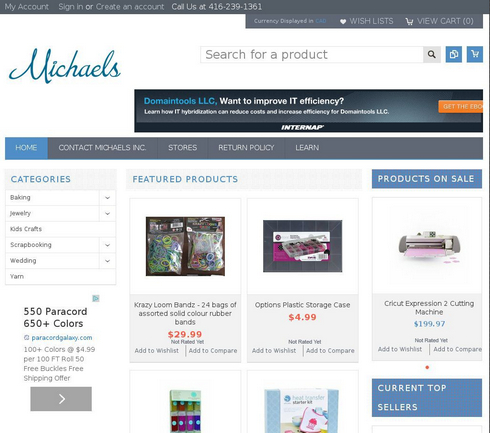 You can compare that to Michaels.com.

For his part, Mr. Michaels explains that the confusion began when Michaels Arts & Crafts rebranded as just Michaels and adopted a logo very similar to his signature.

Mr. Michaels says that the retailer contacted him in 2012 and demanded he transfer the domain name. The company said it would pay $10,000 and not go forward with any claims if he transferred the domain.

According to Mr. Michaels, he then retained a lawyer to get the retailer’s U.S. marks canceled. After retaining the lawyer, he says that the retailer offered him $100,000 to drop everything and transfer the domain. He declined because the site received more than one million visitors per year.

But he says he entered into a verbal agreement with the retailer in 2012 that if he didn’t offer custom framing, the retailer wouldn’t sue him.

Michaels Stores sued Mr. Michaels’ company in Canadian court in April 2014. It’s not clear what triggered the suit at that time, but archived screenshots show that Mr. Michaels adopted the new logo (which he claimed is similar to his signature) that probably confused many people looking for the crafts store. The Michaels.ca store also featured crafts.

Mr. Michaels failed to submit a defense in time and the judge granted a motion for default judgment. The court ordered the domain name transferred (pdf).

Mr. Michaels then appealed to the Federal Court of Appeal. Last week the Court of Appeal affirmed the lower court’s decision, ordering the domain name transferred to the retailer (pdf).