Art Malkov of Meetup.nyc recently helped organize an event in New York. He filed this report.

The event highlighted all the changes happening in the NYC digital space: wi-fi, hyper-local ads, New York City Council tech initiatives, .nyc SEO value and how these changes are affecting everyone from regular people,  to startups and larger businesses.

These changes are blurring the lines between “tech” and “non-tech” in New York City.

This drastic change is affecting everyone within the New York City business community. With the changing digital landscape, it is interesting to see how local government is working to support and bolster this transition. 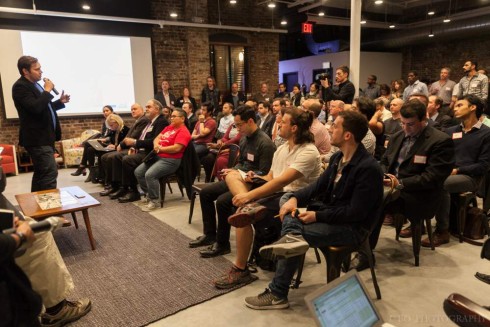 An expertly assembled panel of city officials and entrepreneurs spoke to an at-capacity room of more than 150 people, on how a more connected New York ecosystem is affecting and benefiting all of us, especially NYC businesses.

NYC is currently one of the most tech-innovative cities in the world, and it is trying to lengthen its lead with initiatives that affect every single person and business in the city. We can’t stop change; we can fight it or embrace it. The entirety of New York is embracing the change, and our lineup of speakers brought the latest news and innovations to the forefront. This is the future of NYC, and the people in the room live and breathe the tech changes. 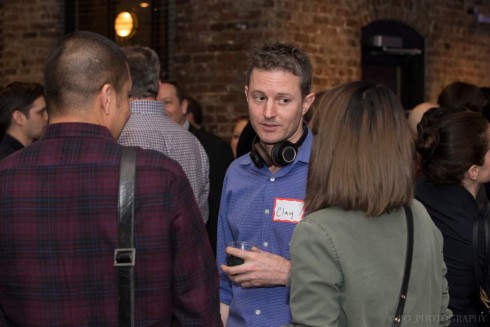 There were business leaders from all walks of life at the event.

The event kicked off with networking with business professionals, entrepreneurs, and city officials over wine before the beginning of the panel.

In attendance were CEOs, CTOs, startup founders, small and medium sized business owners, digital agencies, creative directors, young opportunists, and everything in between. As the wine flowed, people were networking and having a great time, allowing for the perfect opportunity to discover the effects of .nyc on other fields and businesses.

It was a rare chance for everyone across multiple industries to meet with the NYC Chamber of Commerce, to understand the future of business in New York, and how they can be a part of it.

Co-organizer of the event, Art educated the audience about .nyc and promoted its adoption with people from all walks of life in New York. His startup, Souvenirs.nyc, is built on the .nyc platform and was an SEO case study for the .nyc registry.

Sponsor and runs a .nyc focused registry. He provided a phenomenally good .nyc deal for all the event attendees, granting them a free one year .nyc domain, complete with free hosting and webmail.

Drew is a seasoned entrepreneur, veteran marketer, and prominent figure within the New York City tech community. He is a partner at NeedGrowth, where he works with startups, small businesses, and mid-cap companies to accelerate growth and revenue.

Speaking about a recent trend with NeedGrowth clients, Drew echoed the blurring of the lines between “tech” and “non-tech”. Describing it as a move towards a world where everything is redefined as industry + tech: AdTech, FinTech, etc.

Drew explained how this trend is not just with smaller companies but is evident within the largest of the tech giants. Few know that the highest dollar per square foot retailer in the world is a tech company, Apple, while the largest big data logistics platform is operated by a “traditional” retailer, WalMart.

Mark is the President & CEO of the Greater New York Chamber of Commerce, a not-for-profit organization committed to serving over 30,000 business and civic leaders. In recent years, the Chamber has worked alongside mayors and government officials to champion technology within NYC. 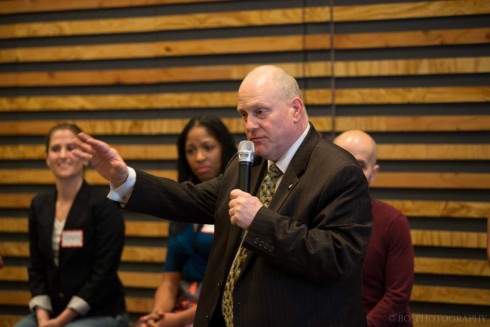 Mark spoke of his most recent trip to China where he helped the U.S. Ambassador and officials from LinkNYC raise $176 million from investors to support the rollout and development of free high-speed public wifi. When complete, LinkNYC will have over 7,500 free public wifi hotspots in all five boroughs. This is a monstrous undertaking that will provide a 10x improvement in digital connectivity within the city, affecting not just businesses, but all residents of New York City. 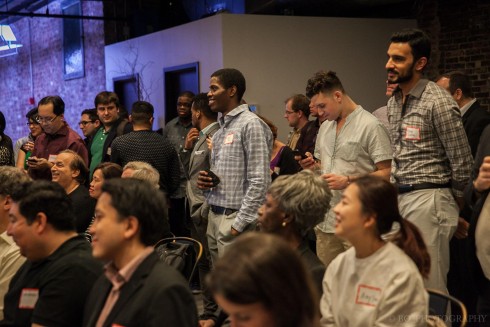 Silicon Harlem is transforming Harlem into an innovation and technology hub in New York. Its goal is to lead urban communities into the future of tech development.

Vizalytics partnered with the New York City Mayor’s Office of Technology and Innovation to build Neighborhoods.nyc, a website that draws from the Knowledge Graph to provide traffic, transit, quality of life, health, inspection, event, and other information about each of the more than 400 neighborhoods in the city’s five boroughs. The site allows NYC residents to receive localized real-time information allowing for safer, healthier lifestyles and fewer daily delays. Neighborhoods.nyc will launch in late March 2016.

LinkNYC is the first-of-its-kind communications network that will replace over 7,500 pay phones across the five boroughs with new structures called Links. Each Link will provide superfast, free public Wi-Fi, phone calls, and device chargers along with tablets for Internet browsing, access to city services, maps and directions.

LinkNYC also allows for businesses to advertise out-of-home in a unique way that benefits residents, tourism, and all industries.

In 2014 Dmitry used JustReachOut to scale a startup from 0 to 40M+ page views, which was later acquired by Google. JustReachOut guides startups in the process of acquiring press outreach, a necessary step for any growing business.

In April 2015, New York City Council Speaker Melissa Mark-Viverito introduced Council 2.0, a roadmap for making the Council more accessible and transparent through digital technology. This plan includes the “Council Labs” website, engagement through social media and SMS, and working with Open Data. It is a revolutionary way for NYC locals to get involved with how the city is run, since the Council carries equal weight to the Mayor’s administration. From new legislation, budgeting, and even land use, it is easier than ever for residents of New York City to know, and be involved with the evolution of this city.