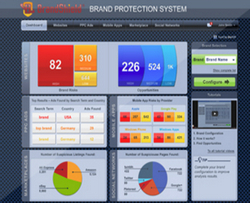 “The need for online brand protection solutions has evolved during the years,” said Keren. “We noticed the first problems back in 2001 when we started. But things became more and more complicated.”

After a decade of ongoing, gradual evolution, ICANN’s new gTLD program was started, signaling to Keren and his partners that “the old fashioned way of treating the problem will not work.” So a period of rapid development ensued, resulting in the debut and spinoff of BrandShield in 2013.

Understanding that a brand’s identity and intellectual property are of great value to even small brands, BrandShield works with its clients to create automated, customized alert levels.

Keren says that its services can be tuned to provide value to even the smallest of companies.

“Sometimes the small companies are the ones receiving the most abuse,” he said, adding that smaller companies can be the ones with the most to gain, and gave an example of a client–a small company owning and selling its patented product on Amazon for less than a year and, using BrandShield, discovering counterfeits being sold all over the world.

The BrandShield engine is able to perform analysis on a threat in addition to discovering it–whether it is a high-ranking or low-ranking threat, among other data points. And it ranks threats according to a pre-set prioritization algorithm based on the preferences of the brand manager. Defining threats according to priority means that low-harm infringements will be given a low priority, for example.

“When there are ten-thousand occurrences of infringement, you have to focus on the most damaging ones,” said Keren.

Keren says clients appreciate the learning capability of the machine–it tunes itself to the brand’s preferences and makes recommendations using the brand manager’s prior actions as inputs.

“They also like having visibility that they never had before, and seeing the patterns and the networks of the abuse, and having the ability to prioritize,” Keren said.

BrandShield’s approach is married to its philosophy, which is that, respective to the client company’s size and budget, the imperative should be to manage a reasonable portfolio, and then monitor the rest. This goes for trademarks, copyrights, use of brand collateral, counterfeiting, and other forms of brand abuse.

“And when something really bad happens on the rest, take action,” he said. “That is the strategy we promote. It’s very different than others in this market.”

Over the years, some brands have equated protection with actions against domain registrants registering similar or exact matches to their trademarks, spending much time and energy and effort to force a registrant to release a name. Keren calls this nonsense.

“Search the web for your domain name, or your registered trademark–you might find a parked page or PPC advertising there. Does that really matter? It has no traffic, so should you care about it? Why would you spend money and time on taking that down? Why go to the trouble of filing a UDRP or URS? Because there might be a thousand other websites that have no relevant domain name, but that have a great deal of traffic, and they are trading on your brand’s name. These are the ones that you should go after.”

BrandShield still works with companies that don’t agree with Keren’s philosophy for brand protection, although Keren says he tries to get clients to “focus on the ones that could potentially cause the most damage,” as a better way to prioritize protection efforts.

“I know it’s a different strategy,” he says. “I think this is the way—if you want to fight a 21st-century war, you need 21st century tools.”