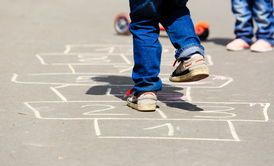 Complainant Hopscotch Group of Paris is a PR company.

The complainant uses the domain name hopscotchgroupe.com and also owns domains like Hopscotch.us and Hopscotch.fr.

The panel found that Lee did not register the domain name in bad faith. Even though he didn’t create a game using the domain name, it’s acceptable to buy a generic domain name with an eye toward selling it.

However, the panel did not find Hopscotch Group guilty of reverse domain name hijacking. The panel wrote:

The Panel considers the Complainant’s case to be relatively weak, insofar as it was based on an ordinary dictionary word. However the fact that the Complainant was a very substantial organisation, the Domain Name corresponded to its name, the Domain Name was not being used by the Respondent and that he asked for a substantial sum for it when approached are all factors which mean that, in the Panel’s view the Complainant could genuinely form a view that its Complaint might have had some prospect of success, depending on the evidence and what the Respondent said.