Domain name conference will be held in The Hague in May. 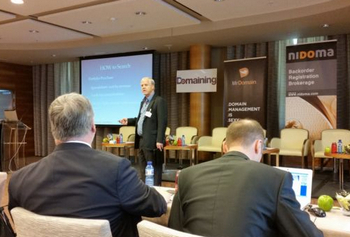 After a successful NamesCon this month, the next domain investor-focused conference on the schedule is DomainingEurope. The event will take place May 29-31 in The Hague. DNW readers can currently purchase passes for half price.

I’ve never been to the DomainingEurope shows, so I asked show organizer Dietmar Stefitz to provide an overview.

Stefitz: I am Austrian, living since 30 years in Spain. Since 1994, I am in the Internet Business. I registered my first Domain in 1994 and have tried to combine the real with the virtual world since then. In 2000, I created the first virtual trade shows and a virtual business center in 4 languages. In 1999, I assisted PSINET with big acquisitions in Europe and have been Vice-President of Anprotel, which has been a constituency member of EUROISPA. In 2008, I sold my company Bemarnet and have been active since in organizing domain events. I am also a Partner in inverdom.com with a small portfolio of Spanish Keyword Domains. I am also trying to establish the European Domainers Club: d-e.club

DNW: What’s the history of the conference?

Stefitz: DomainingEurope started as a local Domain Conference in 2008 then called Domaining Spain. The first event took place at a beach location in Valencia and there were about 30 Domainers. Since then the Conference has been held every year in Valencia and grew to 126 attendees last year.

DNW: What’s the attendee mix between people from Europe and outside Europe?

Stefitz: Around 70% are from Europe and 30% from the USA. In total, we had visitors from over 25 countries including Australia and Israel.

DNW: How many people do you expect to attend?

Stefitz: This year we moved for the first time out of Valencia to a Central place in Europe which is easy to reach by plane from all over the world. We will move the conference around Europe every year to make it easier for all to attend and participate.

DNW: What are the details on this year’s location?

Stefitz: The Location is the Gran Hotel Amrath Kurhaus located in Sheveningen – The Hague – Netherlands. Near the Airport of Rotterdam and also near Amsterdam. I choose this location because from 26 to 28th of May there is the TNW (The Next Web) Conference in Amsterdam.

Tickets include meals, and DNW readers can save 50%.