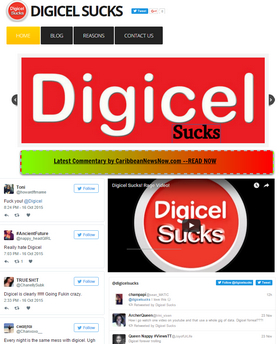 The non-commercial gripe site at DigicelSucks.com.

Mobile phone company Digicel, which is based in Jamaica, has failed to take down the gripe site DigicelSucks.com through a cybersquatting complaint.

The site consists of commentary abut the mobile carrier along with aggregated tweets of people bashing Digicel.

Digicel was quick to file a UDRP cybersquatting complaint against the domain name. DigicelSucks.com was registered on October 12 of this year, and Digicel filed its complaint with World Intellectual Property Organization on October 17.

Generally speaking, UDRP cannot be used to take down gripe sites. But this can depend on the circumstances and the location of the parties. In this case, the panelist rightfully determined that the registrant has rights or legitimate interests in the domain name: It is being used to discuss complaints about the trademark holder, and the site is not monetized.