Some criticisms are valid, and this extends to the domain name industry. 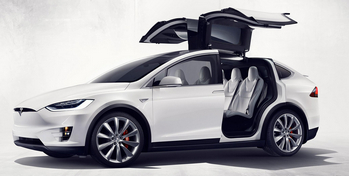 I stayed up to watch the Tesla Model X launch event online Tuesday night. It was supposed to start at 8 PM PST. Nearly an hour later, Elon Musk shuffled onto the stage unapologetically and proceeded to give a lackluster introduction to a car his company is depending on for its future.

It has been amusing to see how people reacted to this. Most amusing are the Tesla apologists who make excuses for the company whenever someone comments about the tardiness and lackluster presentation.

The presentation started an hour late?

“But Elon’s time is very valuable! I’m sure he had a good reason.”

Yeah, and I’m sure the three thousand people in attendance (and many more online) don’t consider their time valuable.

“Remember, Tesla is a small company. You can’t expect it to have a polished event.”

I might need to update my definition of a small company. Last I checked, companies with $3.7 billion in revenue and a market cap of $32 billion didn’t qualify.

Why did it seem like Elon hadn’t rehearsed enough, and shouldn’t they have brought someone else on stage with him that can deliver a decent presentation?

“Yes, Elon’s not a great presenter, but Tesla is different. It’s better than having a slick marketing person on stage.”

Sheesh. I bet if Elon slapped a kid up on stage (he didn’t!), someone would come to his defense and say it’s part of his plan to change the world for the better.

Look, Tesla makes incredible cars, and I love the Model S. But neither the car or the company are perfect.

I see this in the domain name industry as well. People are black and white on topics, and will never admit that arguments or criticisms against something they love might be valid.

New TLDs or .Com? It’s one thing to think .com is king and will always be so, or to take the opposite viewpoint that .com is stale and new TLDs offer better naming possibilities. You can make arguments for both, and you should be willing to consider these arguments.

I also see this when it comes to companies (and sometimes people). Some people think a company can do no good or can do no harm. They are blinded (at least in their public comments) that companies have strengths and weaknesses.

Another example is saying that someone “just doesn’t get it” when they don’t agree with you or buy what you’re selling. I recall someone trying to sell a domain name for over $1 million. They publicly discussed how they explained all the benefits to a number of potential buyers and they all declined at the price. His response (and some commenters) to the rejection: “These guys just don’t get it!”. I guess he never stopped to consider that perhaps he a) didn’t explain the value proposition well or b) the domain name wasn’t worth $1 million.

Don’t be like a Tesla apologist who will never openly discuss the company’s issues. Be open minded, and consider that no one and nothing is perfect.