Getting answers to the wrong questions…

ICANN released a report yesterday called “Phase I Assessment of the Competitive Effects Associated with the New gTLD Program”, undertaken by an outside research firm.

I found the report mostly worthless. This is partly because the new TLD program’s focus on increasing choice and competition is based on the wrong premise.

That premise is that there is a lack of good available second level domain names to register.

When people say they can’t find a good domain name, it’s because they’re looking for the .com. When I searched for a name for a new site recently, my frustration was all around the .com being taken for my best ideas. In almost all cases, I could register the second level domain name in another top level domain name.

What people are really saying is there is a lack of good available second level .com domain names.

New TLDs don’t change that at all. .Com is what it is.

Will new top level domain names change this question of availability due to substitution over time? That’s the more interesting question.

The researchers tried to get some data around substitution of new TLDs for .com. They rightfully determined they’ll need transaction level data from registrars to determine this.

For example, if someone searches for AustinTexasOnline.com and it’s taken, do they end up registering AustinTexas.online, or do they just pick another .com? If someone searches for GlassesGuru.com and it’s taken, do they register Glasses.Expert, GlassesGuru.site, or Glasses.guru instead? Or do they just look for another .com domain?

The only data the researchers were able to use to look at substitution was macro data on domain name registrations. 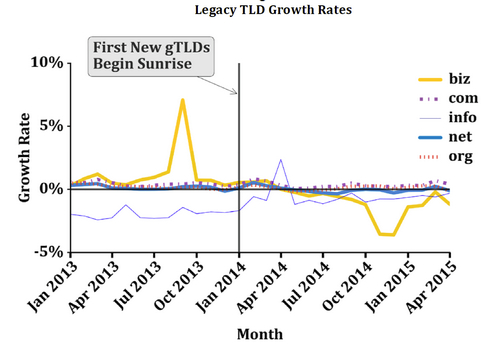 The researchers said this shows that perhaps .biz has been affected by new TLDs, but it didn’t see any major changes in other legacy TLDs. It will evaluate renewal rates in the future to see if it can draw any conclusions.

Perhaps the most interesting thing to me in the report was this parenthetical mention:

(At least one registry that we are aware of, .xyz, has offered free registrations.)

That might not have been necessary to include, and it’s actually controversial. .XYZ is embroiled in a lawsuit with Verisign. .XYZ argues it didn’t give away registrations and was paid for them. Verisign argues that .XYZ orchestrated a giveaway and then used the inflated numbers to improve its positioning against .com and somehow damage .com.

Then again, the researchers weren’t able to see any noticeable effect on .com in its research…