Just one day after appearing in court and having the judge deny a motion for preliminary injunction, Office Space Solutions has dismissed a cybersquatting lawsuit over the domain name WorkBetter.com.

The company, which is launching a new business called Work Better, filed the case last month in an effort to get the domain name from Jason Kneen, who registered the domain name in 1999. 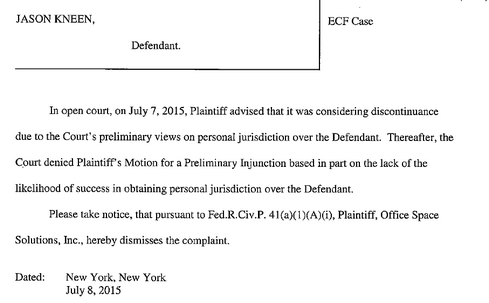 Although the notice of dismissal is predicated on the idea that the court likely wouldn’t have found jurisdiction, my understanding is the judge gave a blistering assessment of the case in open court yesterday.

I’m waiting on the full transcript, but Judge Lewis Kaplan said the situation behind the case looked like a “set up”. The judge also said there are good cybersquatting cases and bad ones, and this one looks like a bad one.

I’ll update when I get a transcript.

Given the judges comments and the ridiculous claims made in the lawsuit, I’m not surprised the plaintiffs dropped the case.

For now, the lawsuit is dismissed. It remains to be seen what happens from here.