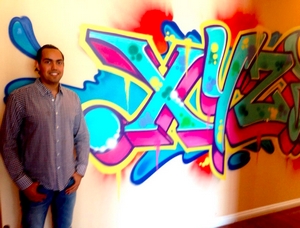 The .xyz domain name hit its one year anniversary today with about 950,000 domain names. That’s just 50,000 names shy of .xyz CEO Daniel Negari’s first year goal for the domain name, an estimate many snickered at when he made it.

Now, many people are probably still snickering about these numbers. After all, weren’t they all given away for free?

No. One registrar gave away about 350,000 domains. Many of the others were registered at bargain basement prices of a couple bucks, but weren’t free.

It’s no secret how to ramp up registration numbers in new top level domain names. Price domains for a buck or two at domain name registrars serving the Asian market. GMO Internet has become the #1 .Click registrar with close to 50,000 names. Last I checked they retailed for less than a dollar.

Before new top level domain names hit registrars’ shelves, many applicants had visions of grandeur. Selling 100,000 domains in a single string, all at .com prices or much higher.

That hasn’t been reality. Looking back, perhaps Negari was one of the smartest guys in the room.

Sure, his top line revenue doesn’t reflect that of the equivalent number of domains sold in other TLDs. But .xyz made noise this past year, and that’s a lot more than can be said of most other new domain names. .Xyz created its own reality while others looked at the domain name business the same way the business has been run for the past decade.

Are .xyz’s numbers manufactured? Do registrations really count if they’ve been given away for free? What about for two dollars?

Imitation is the sincerest form of flattery. A quick look at the top of the new TLD charts shows a lot of domain names that have taken a similar approach to .xyz. Get’em out there anyway you can and whatever price you can.