Revenue still shrinking for many domainers.

That’s according to the approximately 200 people who responded to this year’s Domain Name Wire Survey.

36% of respondents said their 2014 domain name parking revenue was lower than 2013. Only 17% said it was better, while roughly half said it had stabilized. 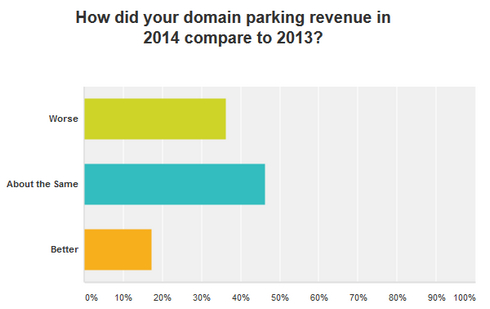 Most domain name parkers have settled on just one domain parking company, rather than working with a bunch. About 40% of people said they plan to try a new parking company in 2015.

Perhaps trying someone new will help revenue. But keep in mind that most parking companies are now on the same Google contract, and parking companies have fewer levers to pull than they used to when it comes to monetizing traffic on tier one monetization.

Challenges in the domain parking business have led to consolidation in the space in recent years, and this is likely to continue.