Few people know about them, but they like the idea of more choice.

DNA is very much an advocacy group for the adoption of new top level domain names, yet I found its survey to be fair about the challenges to collecting data about new TLDs and its question methodology.

A lot of the questions were hypothetical about which site you’d visit, offering a number of identical second level domains with varying top level domains. For example, for the question “Where would you go to pay bills online?”: 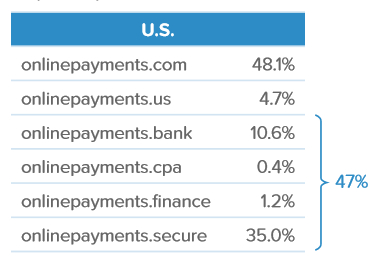 Each of the questions like this included .com, the local ccTLD and four new TLD options (many of which aren’t available yet). I wonder how the results would have differed if the survey used just one new TLD per survey-taker. In other words, with 67% of the choices new TLDs, did this bias answers to new TLD choices in aggregate?

Still, the answer to the above question is rather interesting. It shows a definite interest in .secure compared to other TLDs (especially .bank) when it comes to something that people want to do securely. I’d be really curious to see how people would answer this question comparing just new TLD choices. If anyone wants to underwrite that, I’d be happy to look at leading a study on it.

Another hypothetical asked “Where would you buy shoes if you lived in Melbourne?” and Australian survey respondents said: 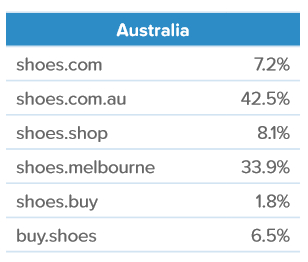 While this might look good for geo domains, I don’t think this question has much value. It’s much like using the same term searched for in Google on an Adwords landing page: people see the similarity and are more likely to convert. I imagine that’s what happened for these questions.

The report showed that awareness of new top level domain names is rather low, and I think most people will agree with that. In fact, the DNA survey probably overshoots awareness by saying 25% are aware of expansion of TLDs. The report notes that this is likely due to the subset of users who took the survey. (There were anomalies in answers to this question, including about a 15% “yes” answer in the U.S. and 70% in Mexico, a difference that can’t easily be explained.)

I also wonder if this question was asked at the beginning of the survey or after people had already answered lots of questions about new TLDs.

Respondents also indicated they’d like more choice when it comes to domain names, but I rarely see people say they don’t want more choice in anything.

DNA members received a complete data set of the survey; the subset report is available on DNA’s website (pdf).