You really missed out if you didn’t make it to Las Vegas last week for NamesCon. About 900 tickets were sold, making it the largest domain name investing conference ever.

Here are my thoughts on the show.

The Tropicana has fantastic meeting space for an event of this size. The three main session rooms were accessible directly from the exhibit floor. Everyone gathered on the exhibit hall to socialize and learn about new products, and then ducked into session rooms to catch the content they wanted.

The conference area is also separated from the rest of the hotel, so you don’t have to wade through a lot of gamblers to get to the area. Since the Tropicana is not a big gambling and eating destination, everywhere you went in the hotel you saw other NamesCon attendees without pushing through crowds.

As great as the conference area is, the rooms are pretty much the opposite. The Tropicana’s service is rather poor and the rooms have lots of flaws. One lesson I learned this year: ask for a room that doesn’t face the airport. 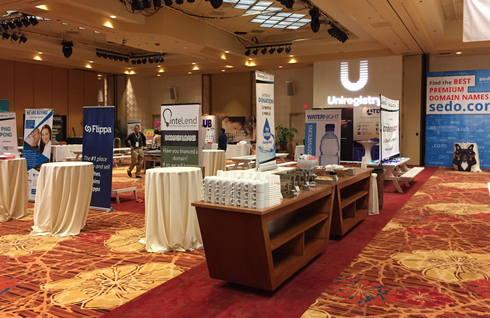 Above: the NamesCon exhibit hall (before it opened).

There were something like 200 speakers at this conference. At times, there were five concurrent sessions.

The content and choice was great, but it might have gone a little overboard. I think two or three concurrent sessions in the three rooms located directly off the exhibit hall would be good. Attendance in each session will be higher with fewer concurrent sessions. The decision-making process would be easier, too!

As for the speakers themselves, they were a big draw. There were many speakers I had never seen before, which made it a lot more interesting.

The TLD Registry Chinese Masterclass was unlike anything I’ve ever seen at a domain name conference. It offered an in-depth crash course on the Chinese domain name market. I can’t imagine the effort TLD Registry put into creating the class, let alone delivering it for 5+ hours every day!

With just under 1,000 people in attendance, it’s safe to say the networking aspect of NamesCon was superb. I got to see the usual suspects, but also chat with people in person that I’ve only known online before last week.

It was also nice to have a positive backdrop to conversations. So much of the domain name industry has been doom-and-gloom since the domain name parking bust. Regardless of how new TLDs do in the future, they are injecting a lot of energy into the industry right now. That’s a good thing.

The great positioning of the exhibit hall, along with social activities such as ping pong and Foosball, made it a great networking location. Maybe I’m getting old, but it’s nice to be able to have a conversation in a semi-quiet location like this compared to during a loud party.

A big congrats (and thank you) to Richard, Jothan, Jodi and James for putting together a great conference!