.Melbourne wins the day, but not by much.

The .Melbourne domain name launched Wednesday in Australia — Tuesday night in the United States — and had 2,775 domain names registered at the close of business on day one of general availability. That does not include landrush domain names that are still in contention.

The zone file for .melbourne is a bit tricky, given that the domain launched close to midnight UTC. So these numbers are straight from the registry.

Donuts also launched three domain names yesterday, and one of them got very close to matching .Melbourne’s first day.

.Restaurant hit 2,388 domain names on day one, according to nTLDstats. Compare that to .rest’s 1,013 after four months, and it looks pretty good. Despite its length and peoples’ propensity to misspell it, I think .restaurant has the potential to be the next .photography.

Donuts’ .gifts ended day one with 1,010 domains in the zone and .sarl, a corporate identifier like LLC, mustered just 176. 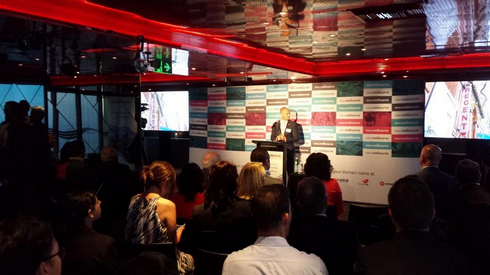 Above: the .Melbourne launch party.