Last week I wrote a story about Michael Bloomberg’s 400 .nyc domain names. The over-the-top defensive registrations included everything from MichaelBloombergisaWeiner.nyc to MikeIsTooShort.nyc
to MikeBloombergisaDweeb.nyc.

The story got picked up broadly, making it to the Wall Street Journal and even CNBC’s Squawk Box. It also just got some hilarious play on John Oliver’s HBO show Last Week Tonight. (Unfortunately, it didn’t mention Domain Name Wire.) 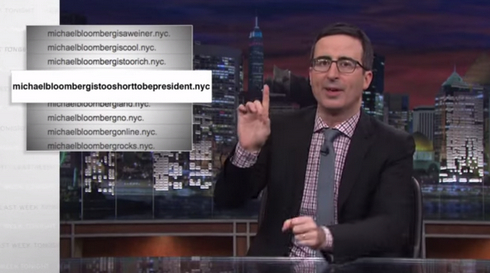 I just reviewed the .NYC zone file and found a couple more domains Oliver registered, each of which links to a website containing just a photo.

Here are the three he mentioned on-air:

Here are two more I found registered to HBO that weren’t mentioned in the show, or at least in the clip:

In case you’re wondering, the last one weighs in at 57 characters (not including .nyc), making it the longest .nyc domain name currently registered. It narrowly defeats cheating-spouse-private-investigator-forensics-crimelab.nyc.

It looks like a few of Oliver’s viewers took his call to action, registering domains such as mikebloombergisaleprechaun.nyc.