B. Riley & Co analyst Sameet Sinha issued a report today estimating that new TLDs should go “from Zero to $500MM in Three Years”. The report also initiates coverage of Rightside with a buy rating and a $15 price target. The stock currently trades for about $10.

I reviewed the lengthy report and spoke with Sinha this afternoon. In general, I think it’s a good overview of the domain name industry and state of new top level domain names. Of course, the big question is if the assumptions underlying his projections are correct.

Here’s a chart that summarizes the projections: 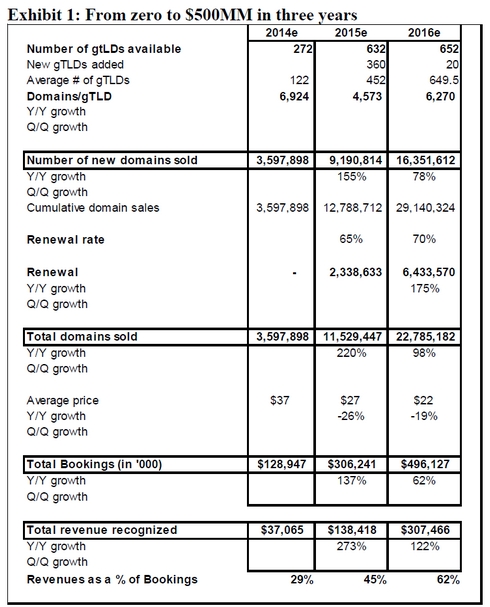 (Note that the domains/gTLD line is actually a quarterly number, so focus on the “Number of new domains sold” line for the annual one to understand the total domains sold in the forecast.)

Underpinning the forecast is an assumption that a gTLD will sell about 28,000 domains annually and settle down to 18,000 in 2015 before rising to the 25,000 level in 2016 as more generic domains are launched.

It also assumes downward pressure on annual registration pricing, dropping from an average price of $37 retail this year to $22 in 2016. Renewal rates also play a big role in the model.

It’s really difficult to predict average domain registrations per domain, and we haven’t even hit a year yet. But at least the first batch is trending for well below 28,000 names in the first year, barring increased awareness. You can also argue that the domains that sell the most registrations will be the less expensive ones. As for renewal rates? That’s anyone’s guess as this point. Numbers used in the model are drawn from existing TLDs, but they could be drastically different for new TLDs.

Sinha forecasts that new TLDs will account for 20% of domain name registration revenue by 2016.

I’d describe the report as bullish, but putting numbers on where new TLDs will be a year or two from now is a very tough call. I’ve previously spoken to an analyst at another firm who was bearish on new TLDs given early registration numbers. Only time will tell.