Apple owned the domain name iPhone5.com when it announced the new device two years ago. It wasn’t the original registrant, but Apple filed a UDRP to get the domain name ahead of launching the phone.

The same can’t be said for the iPhone 6, assuming that’s the name, that will be launched today.

Someone originally registered iPhone6.com in 2008 and sold it on Sedo in 2010. The current owner uses whois privacy for the domain name and parks it.

The domain name will get a lot of traffic today. Patience is paying off for the domain name owner that purchased it four years ago.

Will it pay off for the owner of iPhone28.com?

It’s hard to imagine that Apple will stick to the standard numbering for the next couple decades of iPhones. (That’s assuming even the iPhone 6 uses the numbering and doesn’t switch to something like iPhone Air. It doesn’t own iPhoneAir.com, either.)

Yet people have registered every single iPhone#.com domain name up to iPhone28.com. Every. Single. One.

Those are some long term investments. The graphic below shows the nameservers for the domains; most are parked.

The iPhone isn’t the only Apple product in which people have registered every single future version. When Apple released the iPad 2 several years ago, just about every iPad#.com domain up to 25 was registered. 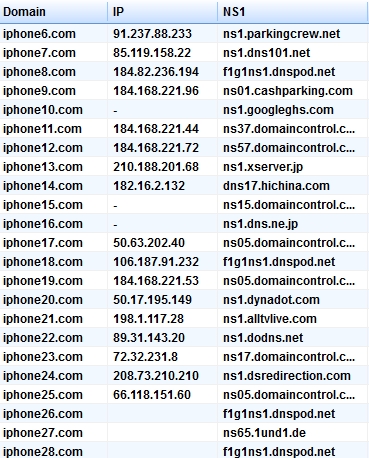