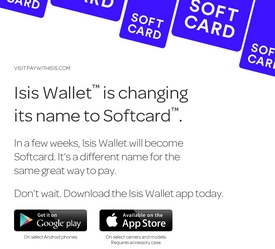 If you watch the news lately, you think of ISIS as a terrorist group. That’s unfortunate for the global mobile payments service ISIS.

So ISIS (the payments company) decided over the summer that it needed to rebrand.

In August I noticed a number of payment related domain names were registered at Mark Monitor, such as willowmobilewallet.com, PaywithWillow.com and Tapwithzoma.com.

As I started investigating who was behind the registrations, it turned out that Jamie Zoch over at DotWeekly was one step ahead of me.

On August 3, he wrote about how he was putting his money on ISIS rebranding as Softcard.

Apparently ISIS wasn’t so sure about the brand, though. That’s why it started registering domains for alternative brands including Zoma and Willow.

Its registrations were pretty extensive, including domains for potential mishaps in the future, e.g. zomaclassaction.com and willowsucks.com.

This goes to show that a lot of thought goes into branding. In this case, ISIS seriously considered several brands and registered related domain names while doing its final due diligence and selection.

In the end, ISIS chose Softcard. Perhaps it shied away from Zoma because, as a short word, it could be an acronym for another group in the future. Softcard seems like a safe (but unmemorable) bet to me.

Of course, there’s this little problem: Softcard.com is owned by a payments company. So the group settled on GoSoftcard.com.