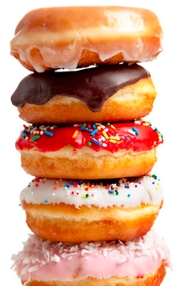 They keep stacking up.

Donuts sent out a newsletter today that announced it is up to 775,000 domain name registrations.

The mega-registry has released 111 top level domain names in general availability, so that’s an average of roughly 7,000 registrations per TLD.

Frankly, this shows that the “portfolio” registry business is quite good. Scoff all you want at its TLDs with fewer than 5,000 registrations, but this is already a nice little business.

111 released. Let’s say donuts ends up releasing another 111 into GA (which might be a bit high). Double the current number and you get 1.55 million domains. Assume the low end of their wholesale pricing on all domains, around $15 per year. That’s $23.25 million in annual revenue.

Remember that .Co sold for over $100 million with just over 1.55 million domains. An exit like that probably wouldn’t create a return for shareholders, so the company needs to do much better than 1.55 million registrations.

Donuts is banking on growing demand over time. Whether that’s from a slow trickle of registrations or a second wind, it’s likely that its numbers will continue to move upward as these TLDs are on market.

Of course, the elephant in the room is what renewal rates are over the next couple years.