Last night venture capitalist Paul Kedrosky discovered .CEO and tweeted his thoughts on it to his 275,000 followers: 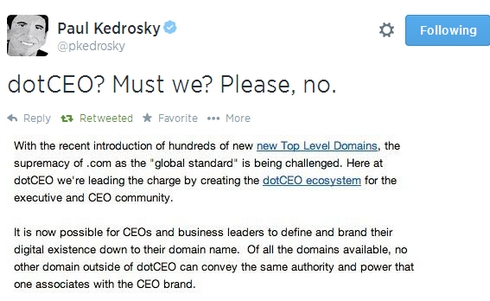 To which Kedrosky responded “And that exact thought had already crossed my mind.”

There are some other colorful comments. Not every commenter was a detractor of .CEO. One person kinda liked it.

In addition to the insurmountable silliness of anyone using a .CEO domain, the backers fumbled the marketing right out of the gate. These have combined to result in only 1,430 .ceo registrations.