Moniker has taken its website offline to fix numerous problems with its new system.

[Read this update with responses from Moniker CEO Bonnie Wittenburg]

Domain name registrar Moniker switched its interface to a reseller platform over the weekend. It didn’t go so well, as evidenced by the 100+ comments on my post about the change.

Issues include being billed for renewals on domains set to cancel, incorrect pricing, inability to execute order, domains disappearing from accounts, missing whois information, and an unclear user interface…it goes on and on.

And it just got worse. Moniker has been taken offline.

A notice at Moniker.com explains that the site has been taken offline to fix these issues.

The good news is you don’t have to worry about all of the problems Moniker is having right now…because you can do absolutely nothing about it.

A message at Moniker says “all operations will be resumed at 9:00 am (EDT).” I guess that means tomorrow, since the notice appears to have just been published. I was on the site after 9 EDT this morning and didn’t have any problems. 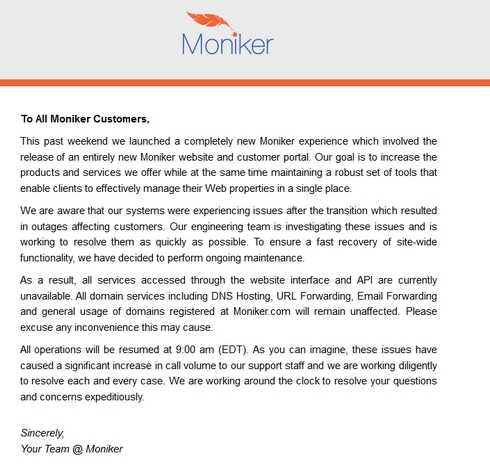 How to Save Money on Your Domain Renewals