.Club is now one of the top ten new TLDs.

The .Club domain name is now among the top 10 most registered new TLDs after launching this morning.

The exact number of registrations (based on the zone file) won’t be available until tomorrow. It takes about 15,000 registrations to make the top ten as of today.

The company received 2,000 registrations combined from sunrise and a premium-priced landrush. 100 of the landrush domains are going to auction.

.Club CEO Colin Campbell and CMO Jeff Sass were on site at GoDaddy this morning when the domain went into generally availability (see photo).

“[After years of work] it was great to actually be here today when anyone can go get a .Club domain on a first come, first served basis,” Sass said.

GoDaddy VP and General Manager of Domains Mike McLaughlin credited a number of factors for the successful launch.

“.Club has made it really easy for us and the end customer,” said McLaughlin. “They’re at a mass market price point…There are no restrictions. Anyone can just pick up a domain and use it.”

Indeed, I suspect the approximately $15 registration fee and traditional registration model are keys to .Club landing in the top 10 from the start.

I personally picked up two .Club domain name this morning, making .club only the second TLD I’ve registered domains under. 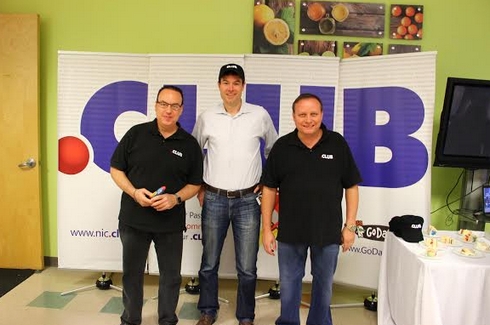 .Club domain names by the numbers