Idea is to change from .com to another TLD depending on what you type. 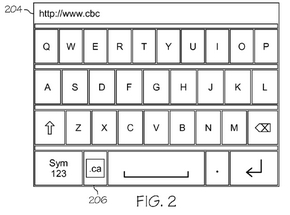 Phone maker Blackberry has filed a patent application with the U.S. Patent and Trademark Office for a predictive and dynamic top level domain name key.

We’ve all used the .com key found on many Android devices and previously on Apple phones and tablets. Recent Apple changes now make you press and hold the “.” key to enter .com or select from a list of other extensions.

Blackberry’s idea is to make the .com or similar key change based on a prediction of which domain name intent to visit.

For example, if you start typing in CBC, the phone or other device might change the touchscreen .com key to .ca (since CBC is short for Canadian Broadcasting Corporation).

Since Blackberry is known for phones with keypads, it also shows a way to show a dynamic TLD on the screen with a fixed TLD key on the keyboard.

I imagine if you’re in the U.S. the key would start as .com and change based on what you type. For example, if you start typing “wikip”, it might switch to .org for Wikipedia. Or it could wait until the full second level portion is typed before suggesting a TLD other than .com.

Although the patent doesn’t contemplate new TLDs, I suspect that if a .guru website becomes really popular at some point (or if you visit one frequently), the dynamic key might change to .guru if the TLD database thinks you’re going to the .guru site. (I think the touchscreen key example would be limited to shorter TLDs. It would require a lot of key size changing for a top level domain like .computer.)