After supporting dozens of Donuts’ launches, Rightside is finally ready to play its own hand. 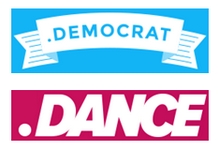 Although these are the first two of its own domains to enter landrush, Rightside’s registry operations are handling the backend for Donuts’ domain names.

Rightside is running a fairly traditional (if not short) laundrush phase. Applicants order domains during the phase and there will be an auction if more than one person registers the same domain.

Landrush for both .democrat and .dance run through May 5.

Demand Media plans to spin Rightside off later this year, and Rightside is counting on new top level domain names to drive growth across its businesses.