Company that invested $1.7 million in great domain name in 2009 gets $50 million infusion from Google Capital. 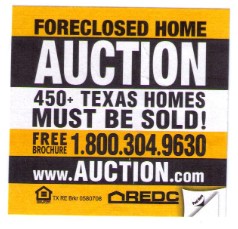 I don’t usually write about fundraising by companies with great domain names. It takes a lot more than a great domain name to build a good business. In fact, what is now Auction.com was already a fast growing business before it had the domain name.

Still, Real Estate Disposition Corporation’s $1.7 million purchase of the Auction.com domain name in 2009 was a smart move that gave the company greater credibility. Until then it operated at the domain name USHomeAuction.com.

With all of the misinformation and questionable practices in the home auctioning business after the downturn, owning Auction.com gave the company credibility that simply wasn’t there with USHomeAuction.com.

Which is why seeing this ad (pictured) on my local newspaper caught my attention. I wouldn’t have paid any attention had it merely read USHomeAuction.

[The original version of this article referred to Google Ventures. The investment was actually made by Google Capital.]