Last month I was shocked to see a UDRP filed for SteelBuildings.com. I was even more surprised when I saw that the domain name seemed to be in use by a company that sells steel buildings.

I reached out to the whois contact for the domain name, as well as the email address on the website, to ask for details on the complaint. Yesterday, a few weeks later, I received a phone call from John Morgan, owner of Atlantic Building Systems and the SteelBuildings.com domain name. Hearing John’s story made me cringe.

This is a case of a small business owner who was smart enough to get a great descriptive name for his industry being bullied by a $1.35 billion (market cap) competitor.

As a result, the small business owner has a choice of either spending thousands of dollars hiring a lawyer to defend his domain name or spending lots of time learning how to defend it himself.

All for a case that I believe is without merit.

NCI Group, Inc. owns the product-defining name SteelBuilding.com (singular), and now it wants the plural. It filed a UDRP to get it.

John provided me with a copy of the complaint, available here (pdf).

But it’s very clear what’s going on here. The site is managed by an outside firm, but it’s done for the actual company that sells steel buildings.

If you need proof, look at the whois history for the domain name. John Morgan is shown in previous records. Having the web design company listed as the actual registrant is not a good practice, but it’s clear when you visit the domain name (or view the records in the Wayback machine) that it is owned by a steel buildings company.

Here’s how NCI argues its case:

Owning the singular of a product name doesn’t give you rights to the plural.

“Steel Building” describes a product. The words on their own are not a brand. In fact, on SteelBuilding.com (annexed to the complaint), the headline reads “Steel Buildings”. It’s used in its descriptive sense. When I googled “Steel Building” (with quotes) today, I got over a half million results — including a Wikipedia page explaining what a steel building is.

If NCI had a trademark for “Steel Building”, then it might have a case here.

That said, some panels are very lenient on the first prong of UDRP, so this prong of the UDRP is a crapshoot.

…if the Complainant produces sufficient evidence to suggest an absence of bona fides on the part of the Respondent the burden shifts to the Respondent to explain its use of the domain. Id. In this case, Complainant does not have any information to indicate that Respondent has engaged in use of “steelbuildings.com” in connection with a bona fide offering of services before notice of a potential dispute.

I’m sorry, it doesn’t have any information to suggest this? Here’s what you see when you go to SteelBuildings.com: 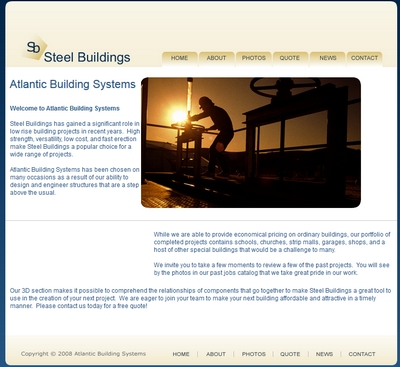 It’s true that the respondent, as in the web design firm, doesn’t sell steel buildings. But it’s pretty damn clear that its client does and is using the website to promote its business. It’s worth noting that the complainant included a copy of the SteelBuildings.com website in its annex.

NCI points to a previous UDRP in which a company filed a UDRP against its web design firm after the web design firm held the domain hostage, suggesting this is a “similar case” for this purpose. That seems misguided.

Respondent does not offer any goods or services in connection with the domain name “steelbuildings.com” and all circumstances point to the fact that the business it purports to promote, Atlantic Building Systems, does not exist.

Anyone who visits the site would think it offers goods and services for steel buildings. NCI’s claims of the business not existing are based on abandoned trademark filings undertaken by the respondent.

It’s pretty easy to assume a business no longer exists if you don’t really want to find it. But just using a simple piece of information from the abandoned trademark applications – the name “Atlantic Building Systems” and the applicant’s name, I was able to quickly see that the business appears to exist and the relationship between the company and the actual registrant of the domain name in whois. Just do a Google search and one of the first results is John’s LinkedIn profile, along with an endorsement for Derrick Bradshaw. It’s Bradshaw’s company that’s in whois and is listed as the respondent in this case.

If the 2003 trademark filing, the LinkedIn profile, and the many years of archives in Wayback are some sort of cover for a non-existent business, then this is one of the most elaborate and long running schemes I’ve every seen.

It’s kind of ironic that NCI points to a trademark notice of abandonment as evidence that a company no longer exists. After all, the company it acquired abandoned multiple trademark applications for SteelBuilding.com last decade. Surely that wasn’t because it no longer existed.

Assume for a second that Atlantic Building Systems no longer exists. This trademark filing would seem to indicate that it existed at one time. So the domain clearly wasn’t registered in bad faith.

NCI concludes its argument that the domain was registered and used in bad faith by noting:

Similarly here, there is no evidence that Respondent is using or preparing to use the disputed domain in good faith. Indeed, there is no evidence that Bradshaw [the web developer] has ever sold steel buildings in any capacity. If, in fact, Bradshaw registered this domain on behalf of another entity, that entity either never existed or ceased to exist. While the disputed domain does resolve to a website, upon information and belief, that website is not monitored and promotes a business that either never existed or no longer exists.

I wonder how the panel will react to “if, in fact” it was registered for the client. I think that’s pretty obvious.

Even a win is a loss

NCI, a huge publicly traded company, has hired big guns for its case: the law firm of Bracewell & Giuliani. (Yes, that Giuliani.) But that doesn’t mean the firm has a particular expertise in UDRP. I found 7 UDRP cases the firm has filed since 2006. It has a 4 and 3 record. One of those losses was an egregious case against a widow. In another, the complainant was found guilty of reverse domain name hijacking in a case against Telepathy.

Assuming the UDRP panel doesn’t go rogue in this case, John will win. But he will still lose.

John has decided to defend the case himself. After talking with him for about 15 minutes minutes today, it was clear to me that he’s a sharp guy. He’s researched UDRP and understands the nuance, such as the benefits of selecting a three person panel.

Still, it’s a lot of work. John has been in the metal building business for about 15 years, and he’s an expert in it. Now he’s having to spend time learning about domain names and responding to this complaint when he should be working on growing his six-employee business.

If he wins, and even if he gets a charge of reverse domain name hijacking, the complainant won’t have to pay him any penalty.