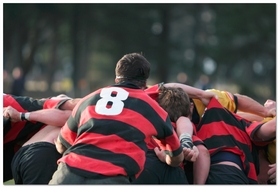 Look closely at this picture and you might see Paul Stahura wincing in pain.

The International Rugby Board (IRB) has effectively killed off its two competitors for the .rugby top level domain name by winning a community objection.

The IRB filed the objection against competitors Donuts and Famous Four media.

It’s rather odd to see this contradiction. Then again, I’m not the one being paid $100k to decide these cases, so I suppose I should defer to the “experts”.

In the .rugby objections, panelist Mark Kantor determined that IRB “easily” showed standing in the case and called many of the applicants’ arguments “frivolous”.

He seemed to weigh two points in particular in coming to his decision.

First is a GAC early warning submitted by the UK government. Here’s what he wrote:

As a preliminary matter, it is important to note the unequivocal views of the Government of the United Kingdom as to both Applicants – the U.K. Government has stated that these Applicants do “not represent the global community of rugby players, supporters and stakeholders.” Further, the U. K. Government has advised that each Applicant “should withdraw their application.” The strength of the opposition by the U.K. to these Applications is an extremely important factor in the balance, in view of the substantial role the U.K. plays with respect to the rugby community The failure to have links with a sports-related community with which the domain is strongly associated, together with the prospect of crosslinkage with gambling sites, is a topic that must be the object of discussion with leading voices in the rugby community, as well as the U.K. Government and other Governments and institutions with a strong interest in the integrity of the sport.

Second is the fact that both Donuts and Famous Four also applied to run strings related to gambling, such as .casino and .bet. Apparently this infers that the applicants will infuse the sports strings with gambling operators. Kantor wrote:

I conclude that operation of the “.rugby” gTLD by [Donuts] will create a likelihood of material detriment to the rugby community due to Donuts’ proposed cross-ownership of gambling strings and sports strings, and the absence of any meaningful controls and separation in the governance structure.