GoDaddy has a new CEO and is moving in a new direction. 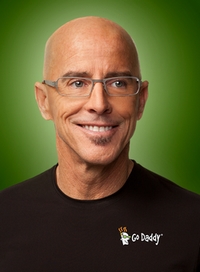 GoDaddy CEO Blake Irving is trying to change the company — and its image.

It was a big shift for the company, which had been run by insiders until an investment group bought in to the company in 2011. The investors later installed an interim CEO until Irving came on board. Irving comes from Microsoft and Yahoo!, and brought a decidedly different attitude to the company.

The company that got itself on the map with sexy advertising and controversy has shifted its advertising to focusing on small and medium-sized business and what its products actually do. The company that had a strict Not Invented Here attitude started to partner with other companies — and buy them. The company known for a security complex became a bit more open…a bit more Silicon-valley like.

Of course, these changes aren’t readily apparent to everyone. You can’t change a company’s image overnight. People still remember GoDaddy’s old commercials. They still remember the elephant. And SOPA.

That was apparent when GoDaddy acquired hosting company (mt) Media Temple earlier this year. (mt)’s customers include designers and developers, many of which aren’t big fans of GoDaddy. They chose (mt) precisely because it wasn’t GoDaddy.

Despite assurances that (mt) would remain on its own post-acquisition, customers took to Twitter to vent their frustrations, and Irving responded explaining that GoDaddy is now a different company.

Maybe so, but it will take a while to prove it.