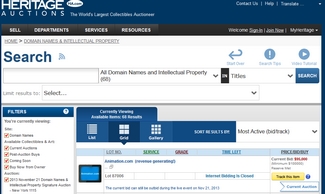 The official live auction for Heritage Auctions’ domain name auction, the first ever domain auction by a major auction house, is tonight in New York City.

Animation.com, which I listed on my picks for the auction, has met its reserve with a $95,000 bid. The two letter XZ.com domain name has also met its reserve after receiving a $120,000 bid. Given the buyer’s premium for these auctions, there are essentially two six figure sales already.

Other notable domains to hit their reserves in early bidding include BusinessPhones.com at $20,000 and DoctorateDegree.com at $10,000.