Because Kozmo.com never fully expired, the group trying to relaunch the brand had to go to extraordinary measures to get the domain.

Kozmo.com, the delivery service that became a poster child for the dot.com boom and bust, is coming back. Sort of.

I first scooped this about a year ago after a Los Angeles company, Yummy Foods, LLC, filed for trademarks for the Kozmo name.

Now, just this month, the company put up a splash page at Kozmo.com after acquiring the Kozmo.com domain name. 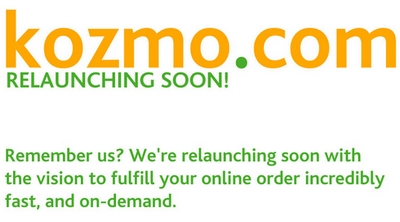 A key to doing so was to get the Kozmo.com domain name – but that was easier said than done.

Thanks to DomainTools, we can see the sort of neverland that the domain name went into after Kozmo went belly up.

Shortly after the company’s demise, the domain registration showed: 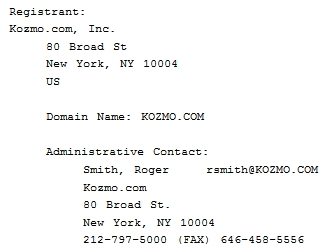 Interestingly, the expiration date was set to a full decade after the company closed in April 2001. Someone decided to extend the registration for ten years, and it must have happened in the company’s final days.

The registration record stayed the same until 2005, when the email address tied to the Administrative contact changed: 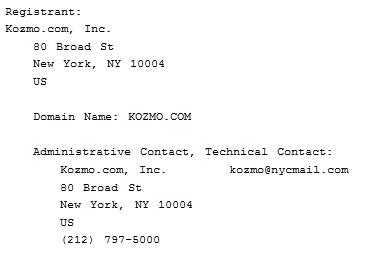 Fast forward to April 2011. The domain name is due to expire, and there’s clearly no way for the defunct company to renew it. The domain goes into its grace period, which is when .com registry Verisign auto-renews the domain to give the owner a chance to renew. When it’s not renewed at the registrar, it typically then goes through the full deletion cycle. But Kozmo.com didn’t. Even though the registrar expiration date in the whois remained April 2011, the registry expiration date remained April 2012. This was likely due to some sort of lock in place at the registry.

Perhaps perplexed as to when the domain would actually be deleted, Yummy Foods filed a cybersquatting complaint against the domain name. It obviously failed, despite including some false information in its complaint.

Then comes April 2013 and another chance for the domain to expire. Again, it didn’t. At this point Verisign’s records said the domain didn’t expire until April 2014 while the registrar’s date in whois still shows April 2011.

That’s when the new Kozmo.com apparently got the idea to approach Network Solutions, the registrar where the domain is held, directly. It looks like Yummy Food struck a deal with the registrar, now part of Web.com, last month to acquire the domain name.