Philippe Dauman loses UDRP, but that may not be the last of it. 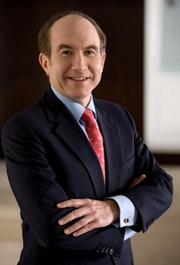 Viacom CEO Philippe Dauman has lost a UDRP for the domain name philippepierredauman.com

He lost the UDRP because he didn’t convince the panel that he had trademark rights in his own name. Panelist Richard G. Lyon followed the letter of the UDRP as well as precedent in coming to his decision. That was the right thing to do.

But I also don’t hesitate to render my own opinion that the person who registered the domain name is a cybersquatter. And given the remedies available in court, he might end up wishing he lost the UDRP.

The domain name was officially registered by “Dinner Business” in Valdosta, Georgia. After registering the domain, the owner or someone affiliated with the domain apparently reached out to Viacom to extract a ransom for the domain:

“In the voicemail message, Respondent says he is a ‘domain name broker’ from New York and Florida, and asks whether Viacom has ‘any interest or concern’ in the Disputed Domain Name. He further claims that he is ‘building an ad-based TV system … and will be using this domain as part of the system shortly. The domain will be connected to various social media like YouTube … and other equivalents in China and India. On June 20, 2013, he called and spoke to [a Viacom representative]. During this conversation, Respondent stated that he had acquired the ‘geo-coded domain name with the intention to distribute content in China and India, and generate ad-based revenue … like an Aereo-based system.’

Once the case was filed, the domain owner tried to justify his actions by stating:

I am working on a very small TV-like system to stream news content. I chose to use this domain as a small news site on the impact of video streaming. It has been used to link to publicly available, generic video clips.

The panel didn’t need to consider if the domain was registered in bad faith. It appears so. But since Dauman failed the first prong of the UDRP, he lost the case.

MTV: Don’t Be a Jackass

Arbitrator: Viacom is a Jackass