I think I know, but feel free to dig in some more.

I just received a scam phone call and I’m trying to figure out what the perpetrator’s goal is. I have an idea, but I figure some readers might know more.

The caller said he was with “an independent agency with I-C-A-N-N”. He didn’t say “I-CAN”, he actually said each letter separately.

He then said that it was necessary to verify the information associated with domain names once a year. He asked if I was the owner of a particular domain name.

I happen to know that I did own the domain name, but it expired recently and is in pending delete. He then proceeded to verify all of my information as seen in whois before the domain expired.

I played along to try to learn what was going on.

At the end of the call, I asked him again who he was with.

“We’re just an independent agency with I-C-A-N-N”, he said. “We do back office work and updates for them.”

Now, obviously this is not true.

When I pressed the caller, he said “apparently we cannot disclose our name.”

The call originated from 312-600-4812. I googled that phone number, which led me to DirectoryDeal.com and DirectoryPals.com. If I didn’t know any better, I’d say these sites are trying to perpetrate click fraud: 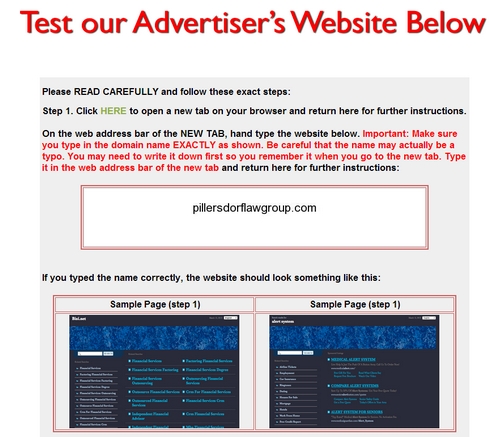 [Update: the sites were taken down shortly after this post was published.]

Both of these domains actually frame the site calidirectory.com.

And if you visit them more than once, you get this message:

The domain name the page asked me to click on is owned by Domain Asset Recovery.

If you look at the HTML in the frame, you’ll see that the site operator keeps rotating in different domain names, all owned by Domain Asset Recovery. The image takes this format:

Just change that number before .jpg and you get domain names such as nicholslawfirmllc.com, meierlawoffices.com, lawofficeofmichaelanatole.com, and thewillislawfirm.com. They’re all owned by Domain Asset Recovery.

[Update: the sites were taken down shortly after this post was published.]

Which leads me to one conclusion, based on this: I’m going to be contacted shortly about recovering this domain name. The caller wanted to verify there would be an actual person that can be reached that might still want the domain.