There are a number of reasons for contradictory String Confusion Objections for top level domain names. 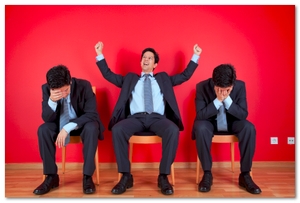 The guy in the middle got the right panelist.

Of the four types of objections that could be lodged against new top level domain name applications, it would seem that string confusion objections would be the most basic.

Is one string confusingly similar to another?

Yet, while most people (other than the losers) haven’t had issues with Legal Rights Objections, there are clear cases of disagreement — even amongst panelists — when it comes to string contention objections.

One panelist has ruled that .cam is confusingly similar to .com while another decided it is not. A couple panelists have ruled that plurals and singulars of the same word will cause probable confusion amongst the typical internet ueser while most have not.

And, most shockingly, a panelist has ruled that .通販, a Japanese string that loosely translates to “online shopping”, is confusingly similar to the English language .shop.

How did this happen?

Here are the guidelines in the new top level domain name applicant guidebook for string similarity:

That leaves a lot up to interpretation. That means string confusion objections decisions are more dependent on who the panelist is than the merits of the case.

Adding to the confusion is that ICANN, through an independent panel, runs its own similarity check on each top level domain name application. This check is only for visual similarity, whereas objections can be for any type of similarity.

This panel found only two sets of strings, .hotels & .hoteis and unicorn & .unicom, to have a probability of user confusion.

Notably, the panel did not find that plurals of strings would be too similar to singulars from a visual standpoint. ICANN also rejected further GAC advice that plurals and singulars be placed in contention sets.

So there are loosely written rules open to interpretation in a process that’s never been run before, plus a separate panel’s own visual interpretation of strings (aided, at least, by a computer algorithm) that suggested few were in contention.

What does resemble mean, anyway? Does a string have to be both visually and aurally similar, or just one of these? How much does the “meaning” of two strings come into play?

Can a panelist disagree with the ICANN string similarity panel’s decision regarding if two strings are visually similar, as the panelist in .pet vs. .pets did?

You can argue that the guidebook set string confusion objections up for failure. It’s not specific enough. It also should have called for three personal panels.

You can also argue that International Centre for Dispute Resolution (ICDR), which handles these disputes, messed up the process.

Frankly, I don’t have much faith in ICDR. Compared to World Intellectual Property Organization, which is handling Legal Rights Objections, ICDR has been tardy and has a horrible online system to disseminating information about these disputes. (I sure hope that the panelist who handled the Amazon dispute speaks Japanese and has handled internet disputes previously. He doesn’t show up in any UDRP decisions.)

Where this leaves us is another question.

Some cases will surely be put up to the community.

The objection to Amazon’s application for .通販 was brought be an applicant for a potential new TLD, .shop. As a result, .通販 will be placed in a contention set with .shop. But Amazon.com already has its own application for .shop. Unless ICANN intervenes, this means that Amazon will have to choose to bid on one domain or the other in the same auction to resolve this contention set.

The net-net is more confusion and distrust in a process that has been full of it. I can’t help but think it could have been avoided.