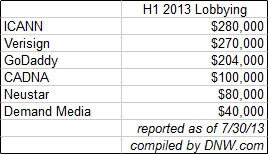 It’s been a couple years since I’ve done a round up of how much domain name companies are spending on lobbying in Washington.

I just ran an updated analysis and made two key observations.

First, major domain name companies including VeriSign and Go Daddy are spending less on lobbying than they used to.

Second, a lot of non-domain name companies are lobbying about domain names, mostly due to new top level domain names.

The chart (top right) shows how much six domain name companies and lobbying groups spent on lobbying activities in Washington for the first half of the year. This is based on filings under the Lobbying Disclosure Act as of today.

Verisign’s spending has steadily declined since 2008, and it spent just $270,000 during the first half of this year. Last year, when it was working on its .com contract renewal, the company spent $675,000 on lobbying efforts.

Compare that to 2006, when the company spent about $7 million on lobbying.

GoDaddy spent just $204,000 during the first half of the year, and all of that was in-house. Last year the company spent about $750,000, and in 2011 it spent over $1 million. The most recent drop seems to be timed with General Counsel Cristine Jones’ departure from the company.

The Association for National Advertisers lobbied everyone from the House of Representatives, Senate, Federal Trade Commission (FTC), Department of Commerce (DOC) and National Telecommunications & Information Administration (NTIA) about new top level domains as it tried to slow down or stop their rollout.

The Coalition Against Domain Name Abuse (CADNA), a trade group representing trademark interests for domain names, spent $100,000. If it continues that pace in the second half of the year it will be in line with the previous two years.

A handful of large companies that aren’t (at least yet) in the domain name business spent money lobbying about domain names this year. Most of it was related to new top level domains.

Amazon.com is one of the big names that stands out. The company is an applicant for 76 new top level domain applications. But its flagship application for the brand .amazon is in doubt thanks to the Governmental Advisory Committee (GAC). I suspect some of the lobbying had to do with the NTIA.

HP, which couldn’t apply for .hp because of restrictions on two letter top level domains, also lobbied about domain names.

GoDaddy and Verisign get more patents