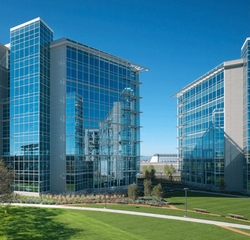 GoDaddy is opening a new office in Sunnyvale, California as it rapidly increases its headcount in the area.

The new 40,000 square foot office more than triples the company’s current space in the city.

40 GoDaddy employees were in Silicon Valley as of February, and the press release about the expansion says that number has “more than doubled” since then.

The space is in Moffett Towers (pictured), a 1.8 million square foot office complex near the juncture of Highways 101 and 237. Other big names in the complex include Microsoft, Amazon, Google and HP. Incidentally (or not), GoDaddy is aggressively hiring employees away from some of these companies.

New .com rankings: a surprise entry to the top 10