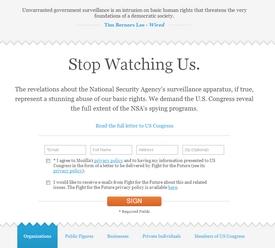 The coalition decided to launch its campaign on the web on a .us domain, StopWatching.us.

Although .us can have catchy uses like .me domain names, I don’t see them often used this way. StopWatching.us has a couple nice characteristics: a play on “us”, as well as it being the United States’ country code domain.

The domain was most recently registered in September 2012 by John Kruger in Wisconsin. The whois shows it was transferred to Fight for the Future / Center for Rights today.

I reached Kruger by phone today to see if he sold the domain name, and he said he wasn’t at liberty to discuss it. When I asked if he no longer owned the domain, he said “I no longer have control of that domain.”

A note on the bottom of StopWatching.us reads “Thanks to Initiate Demand for providing the stopwatching.us domain name.” Historical whois records show that Kruger is behind Initiate Demand.

StopWatchingUs.com is owned by someone in China. Who is of course being watched.

Of interest to the domain industry, domain registrar NameCheap is a signatory of the initiative.