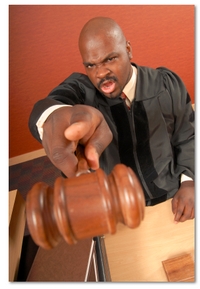 A three person World Intellectual Property Organization panel has found an intellectual property lawyer guilty of attempting to engage in Reverse Domain Name Hijacking and bringing a UDRP complaint in bad faith in abuse of the administrative proceeding.

Upon reading the decision, you’ll wonder if Weyer actually read the rules about UDRPs. The panel ruled that he failed to make even a prima facie showing that the respondent lacked rights or legitimate interests in the domain.

Complainant merely includes the conclusory assertion, unsupported by any facts, evidence, or argument, that Respondent lacks legitimate rights in the disputed domain name. The remaining assertions of the Complaint (reproduced in Section 5.A.2 and 5.A.3 above) relate to the element of bad faith—and are equally unsupported.

In contrast, Respondent provided documentary evidence that establishes that it acquired the disputed domain name ishades.com several years before Complainant sought and obtained his trademark registration. Respondent’s documentary evidence is hardly obscure—the date Respondent acquired the disputed domain name ishades.com is found in the WhoIs record and the date that Complainant acquired its trademark rights is found in the U.S. Trademark Office database. Had he not actually known these facts, Complainant could have easily discovered them with minimal due diligence.

The Panel concludes that these facts were in all likelihood known to Complainant at the time he filed the Complaint and that the Complaint itself is frivolous.

The WIPO panel also believed that Weyer “materially mischaracterized” communications between Weyer and the domain owner regarding acquiring the domain name. It also determined:

The allegations of the Complaint were unsupported by documentary evidence, despite the fact that such evidence exists, could have been discovered after a few minutes of Internet research or would have been in Complainant’s possession. This includes such basic evidence as a copy of the trademark registration upon which the Complaint is based and copies of the communications between the parties.

The respondent was represented by John Berryhill.