Non-profit plans to continue hiring in all departments.

ICANN expects to end FY 2013 this June with nearly 50% more employees than it began the year with.

That’s according to the non-profit’s FY 2014 draft operating plan, which shows an expected 233 employees by the end of June. It ended June 2012 with 158 employees. That’s nearly 50% growth in just one year.

The forecast shows that ICANN expects to hire 47 people in this quarter alone. 19 of those are allocated to the new top level domain program.

The Global Stakeholder Engagement Group and Operations team will see the biggest headcount growth during FY 2014 under the draft plan, going from 23 to 29 and 11 to 17 projected employees, respectively.

DNS Industry and the technical functions team will both get five new employees under the draft FY 2014 plan.

I expect much of the hiring to occur outside the United States. 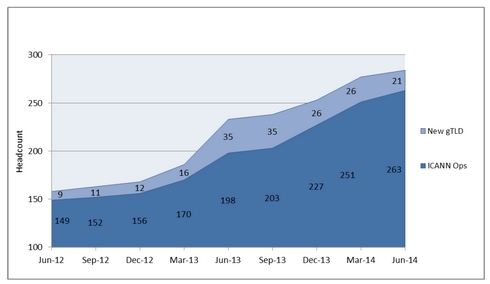 Do only 4 new TLDs have a chance of going live this year?