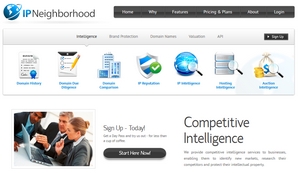 The profile piqued my interest because it described tools on IP Neighborhood that are similar to those of DomainTools. And with IP Neighborhood’s low price point (I just signed up for the $19.95/month plan), it could be a good alternative to DomainTools.

After trying it out for a bit I can confirm two things.

First, IP Neighborhood has some useful tools worth checking out. Second, it’s in no way a replacement for similar tools offered by DomainTools.

One of the tools I use most often at DomainTools is whois history.

IP Neighborhood has a whois history tool that purports to give dates when changes were made in whois.

To give it a spin I punched in DNW.com. At first it said there was no record of the domain in the database, but it quickly pulled it up when I searched a second time.

I ran a few other domains and found similar results with inaccurate dates.

I wouldn’t put much stock in the information you get from IP Neighborhood’s whois history tool.

Click on a name or email address on a whois record and you can see a reverse whois, i.e. find other names owned by the same person. There’s also a separate search feature for this.

The reverse whois didn’t pull up nearly as many results at DomainTools’ similar service, but it was somewhat useful. DomainTools charges an arm and a leg for reverse whois reports, so if you’re just trying to get a feel for the types of domains someone owns, IP Neighborhood might be a good bet.

Want to find domains registered in .net or .org but not in .com? You can search by keyword and see a list. Don’t expect to find any gems, but a bit of sifting and you might discover some domains worth registering.

This tool is pretty nifty. It lets you see who purchased domains at various domain auction services. It shows the whois record the day of the sale, 7 days later, and a month later.

Auction Intelligence might be a useful way to find people that are buying domains with certain keywords. They might be good buyer prospects for some of your similar domains. You might also use it to “decode” who certain buyers at expired domain services are.

There’s also some neat data on which companies are buying the most auction domains.

The pitch on the site is that IP Neighborhood monitors “new domain name registrations in .com .net and org, so you can uncover new trends, emerging markets and track competitors.”

I checked a sample of domains and they were all fairly old registrations, so I don’t see the point of this tool.

I think you’d be better off using Lean Domain Search’s trend tool for this.

Sales comps can be really valuable. IP Neighborhood pulls in sales data from certain venues, some of which you won’t find on other services (e.g. Australian sales).

This is useful, although I wish it included the name of the venue where the domain sold. It’s helpful to know if a domain was sold in an expired domain auction as opposed to a one-to-one transaction.

I also spot checked a number of domain sales reported by Afternic last week and none of them were in the tool.

In general, I’ve found it best to check multiple sources of data when looking for sales comps. Two good resources are DNSalePrice.com and Namebio.com.

IP Neighborhood does a good job pulling together lots of types of domain data. I can see how it would be useful to a number of domain investors, especially at such a low price point. There are better alternatives for most of its tools, but the compilation of data in one place is a nice value-add.