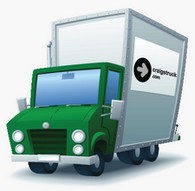 Online classifieds site Craigslist has filed a federal lawsuit against a Washington company that offers delivery services under the name Craigstruck.com.

Craigslist alleges that Craigstruck.com is infringing its trademarks and using its name to get more business.

Craigstruck.com matches people who have a truck and are willing to move stuff with people that need something moved. It promotes itself as service for people buying stuff on Craigslist. According to the suit, Craigstruck.com provides HTML code that people can include in their Craigslist posting to promote the service.

As someone who has sold stuff on Craigslist before, there’s a huge need for a service like this. The problem here is the proprietor’s choice of business name.

Craiglist alleges that some of the service’s promotional materials include the name “craigstruck” in a lowercase font similar to that of Craigslist.

Craigslist is not suing under cybersquatting laws, but is requesting the domain name registration be cancelled or transferred into its control.

Booking.com goes to court to try to get trademarks