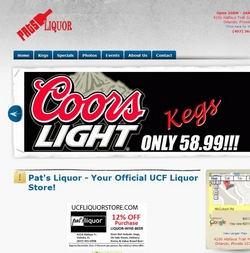 The page that used to be at UCFLiquorStore.com. Screenshots.com on December 23, 2012.

The University of Central Florida has sued a local liquor store that bills itself as “Your Official UCF Liquor Store”.

Pat’s Liquor, which is located about a mile from UCF’s Orlando campus, has been using the domain name UCFLiquorStore.com and pitching itself as the official local store of the university.

The University also takes issue with the company’s Facebook page at facebook.com/patsliquorucf.

UCF says it sent multiple cease & desist letters to the store but did not receive a response. So it filed its lawsuit (pdf) for trademark dilution, unfair and deceptive trade practices, and misleading advertising in U.S. District Court in Orlando yesterday.

Among the university’s requests are that Pat’s Liquor transfer the domain name into its control and take down the Facebook page.

As of this morning, UCFliquorstore.com resolves to a page saying it is offline for maintenance.