Israeli model is also a .me fan. 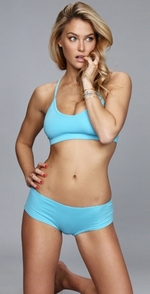 Israeli model Bar Refaeli will star alongside Danica Patrick in one of Go Daddy’s Super Bowl Commercials this year, the company announced today.

A press release from the company doesn’t mention a connection Refaeli has to Go Daddy: she’s a .me user. Go Daddy is a partner in the registry that runs .me.

In 2011 Refaeli teamed up with former model Dudi Balsar to launch under.me, a line of underwear sold online. (That’s where the photo on the right comes from.)

(Michael Berkens owns Underme.com, which forwards to Under.me. I’ll reach out to him and ask why.)

This will be Go Daddy’s ninth consecutive Super Bowl. Its controversial early Super Bowl commercials are largely credited with putting it on the mainstream map.

.Co will also return for a commercial with Go Daddy this year — its third consecutive appearance.

How Go Daddy Can Court Domainers