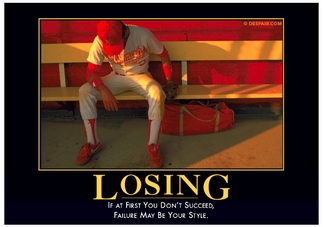 The owner of the domain name Despair.net has filed a lawsuit (pdf) against Despair, Inc., maker of “demotivational” products, to block a UDRP decision on the domain name.

Despair, Inc. filed a UDRP against the despair.net domain name on March 20.

The case was weak, but the registrant (Darren L. Dittrich) of the domain name apparently didn’t receive notice of the dispute until after the decision was handed down. Since Dittrich didn’t respond, it was easier for the panelist to find in Despair, Inc’s favor.

Dittrich is asking the court for declaratory judgment that he is not cybersquatting. He’s also asking for cancellation of Despair, Inc’s trademark for “Despair”.

Despair, Inc. has a history of having fun with trademarks. It actually managed to get the U.S. Patent and Trademark Office to grant it a trademark for the 🙁 emoticon, and it jokingly said it was going to sue people for using the emoticon in email.

My guess is the company isn’t laughing about this latest trademark dispute.