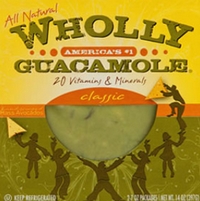 I love Wholly Guacamole. It’s the only guacamole I buy; I just picked some up at the grocery store over the weekend.

Too bad it turns out some people at the company are assholes.

I don’t think I’ve ever used that term on this site, but I think you’ll agree after reading the case the company (Avomex, Inc) filed to try to get WhollyGuacamole.com. (It lost.)

The domain name was registered by Barry Pierce in 2004. He died in 2006. In 2007 Avomex started using the Wholly Guacamole brand in commerce.

After trying to pressure Pierce’s widow and her son to accept an offer to buy the domain in a short time frame, Avomex filed a UDRP on the domain name.

You want to hear what Avomex’s first example of supposed bad faith is?

Yeah, Mrs. Pierce. You should be ashamed of yourself for not updating the whois record on WhollyGuacamole.com as soon as your husband died. I’m sure it would have been top of mind.

Oh, it gets better:

So when your spouse dies then it’s a new registration. But you acted in bad faith by not updating the whois information right away. And you should have done a trademark search after your husband died to make sure his existing domain registration didn’t violate a newly filed trademark.

Anyone know of another good brand of guacamole?