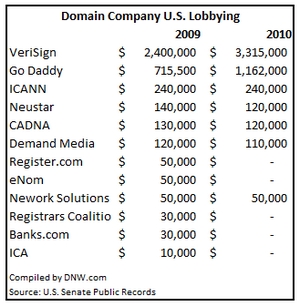 Both VeriSign and Go Daddy substantially increased their spending on U.S. government lobbying over the past year, data collected by Domain Name Wire show.

The numbers are based on public records filed with the U.S. Senate under the Lobbying Disclosure Act.

VeriSign spent $3.315 million on lobbying last year, up from $2.4 million in 2009. Go Daddy Group, which owns domain name registrar GoDaddy.com, spent $1.162 million in 2010. That’s up from $715,500 in 2009. Among the issues Go Daddy lobbied were piracy, privacy, and rogue internet pharmacies. Go Daddy has been a strong advocate of shutting down these pharmacies and suspended 150,000 domains related to rogue online pharmacies last year.

Most other domain name related companies either held lobbying expenditures steady or decreased them, as the chart in this post shows.

Amazon.com, HP, Ford among those lobbying Washington about domain names

GoDaddy and Verisign get more patents