Registered base of .info domain names spikes in 2010.

2010 isn’t over yet, but .info registry Afilias has released its 2010 .Info Annual Report (pdf). (This is likely to coincide with the ICANN meeting in Colombia and media attention around new TLDs.)

Afilias bills .info as the first “new TLD”, and it has easily outpaced its rivals in terms of registrations. At the end of September .info had 6.8 million domain name registrations. Compared to recent years, this is a nice uptick: 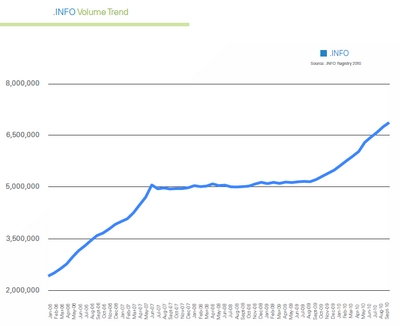 .Info is averaging 300,000 new registrations per month in 2010. According to the registry, about 20% of .info domain names are used for real web sites that appear to have original content. North American accounts for 58% of all .info domains registered, while Europe accounts for 27%. .Info is available in 10 IDNs at the second level, but there are fewer than 30,000 registered. German scripts lead the way with 82% of the .info IDNs.

The annual report is fairly interesting. Yet the last example of a .info site in the report provides a stark reminder about the dominance of .com. It mentions MoveYourMoney.info, which was mentioned on the CBS Sunday Morning Show in February. That same day, MoveYourMoney.COM received 27,000 visitors who were surely looking for the .info but typed in .com.