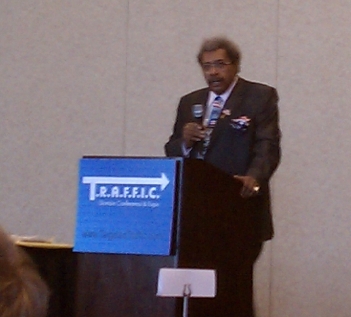 Don King addressed the audience at the TRAFFIC conference in Miami. King said he came to promote what he’s calling the “People’s Internet”. It was difficult to understand exactly what it is, but he said it’s a way for people to broadcast instantly on the internet. He has two “First Amendment” trucks to capture video and man on the street interviews.

King acknowledged the audience has the the name – “domain name is the name, now you must have the content…you have to have something sound on the ground when you’re around.”

King is also promoting an event in Miami at American Airlines Arena on On December 17. It’s a festival/boxing match/something else.

To be completely honest, I couldn’t understand much of what King was trying to communicate. So anyone else in the audience that wants to chime in let me know.