Last month I wrote about DevHub’s latest web site builder release and noted that the company was adding a social element to building web sites.

The social functionality just went live this week, and so far user engagement is up significantly. Most importantly, new users are spending more time developing their web sites. Over 1,500 sites have been created in the past 12 hours and nearly 5,000 tasks completed. Tasks include adding content, creating links, etc.

The idea behind the game is to get people to do more with their web sites and avoid “orphan” web sites.

TechCrunch did a write-up of the release earlier this week.

A pro user who’s been using DevHub for a while? Don’t worry, you can turn the gaming elements off if you’d like. 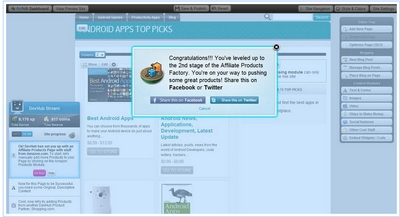